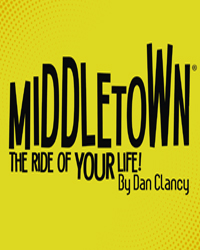 Through the highs, the lows, and everything in-between, MIDDLETOWN®. is the ride of your life. Follow the story of two couples — Peg and Tom, and Dotty and Don — as they endure the rollercoaster of life together in this exhilarating and universal depiction of love, life and friendship. The cast will star DIDI CONN, known for her portrayal of Frenchy in GREASE; DONNY MOST, who starred as Ralph Malph in HAPPY DAYS; LORETTA SWIT, best known for her portrayal of Major Margaret "Hot Lips" Houlihan on MAS*H, for which she won two Emmy Awards; and ADRIAN ZMED, best known for his starring roles in the BACHELOR PARTY, GREASE 2 and TV’s T.J. HOOKER.

Theatre Policies: Everyone attending a performance must have a paid ticket. Masks & face coverings must be worn at all times. Guests entering the venue are subject to temperature checks. Latecomers will be seated at the discretion of management. No outside food or beverage permitted, unless medically necessary. The use of cameras, recording devices, cell phones, beepers, and other electronic devices during the performance is prohibited. We thank you for your cooperation!

Buy To This Event Directions